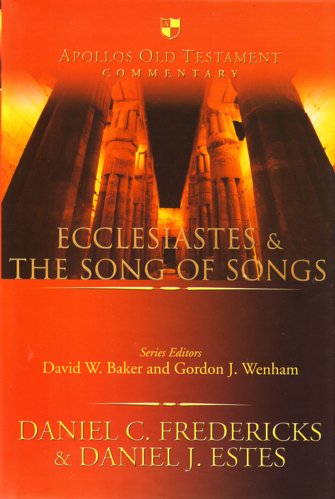 For Daniel Fredericks, allowing the thematic words and phrases of Ecclesiastes to speak with their Hebrew voices demonstrates its affinity with the breadth of Old Testament legal, poetic, wisdom and prophetic writings as well as the teachings of Christ and the apostles. Ecclesiastes is found in the canon of Scripture because it plays a significant role in a cumulative theology of the Old and New Testaments.

The beautiful and mysterious lyrics of The Song of Songs have prompted a wide range of interpretations. Daniel Estes reads the ancient song cycle in terms of its literary genre as Hebrew poetry. By attending carefully to the literary features of the text, he seeks to remain sensitive to the emotions that the poet desired to express and to reproduce in the reader. At the same time, he endeavours to hear the echoes of the Song as they resonate within the larger context of the biblical canon, and to suggest how its prominent theme of the nurture of intimacy can be applied to life today.

Song of the Bride

Song of Songs, Unveiling the Mystery of Passionate Intimacy with Christ

Commentary on the Song of Solomon **