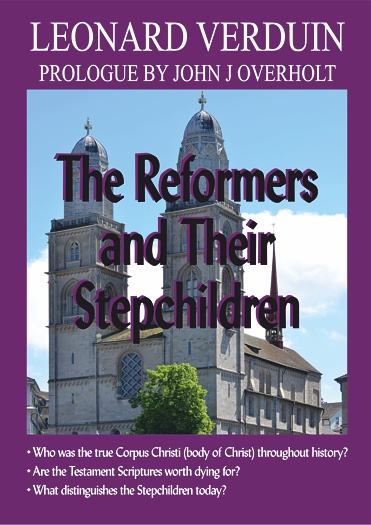 Reformers and their Stepchildren by Leonard Verduin and published by Classics.

“The Reformers and Their Stepchildren” is a brilliant and well-documented book that reveals the tension between the church and Christendom. According to Leonard Verduin, the ideal formula of a society in which no religion is designated as the right religion, is the result of pioneering done by the "stepchildren" of the Reformation. While it is true that practically all Christians have heard about the Reformers but few have heard about their “stepchildren”—the groups of Christians, like the Anabaptists, who sprung up during the Reformation and were committed to radical discipleship. The Reformers tried to silence these “stepchildren”, but they lived on.

The Reformers and Roman Catholics referred to the “stepchildren” as “Donatists,” “Cathari,” “Stabler,” and “Communists,” among other names. Verduin devotes a chapter to each aspect of Anabaptist faith and life that were suggested by those derisive names.

Pastor as Scholar & Scholar as Pastor