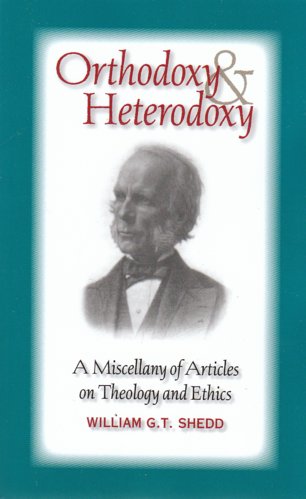 Composed of numerous articles relating "to principles in theology and ethics which are eternal, and vehemently opposed in the standing conflict between orthodoxy and heterodoxy." Shedd notes that in this war "[t]here is nothing new in the orthodoxy of today; and nothing new in the newest heterodoxy. A scholar vested in ancient learning can trace both alike in the antagonisms of the past. Speaking generally, the orthodox respects and cultivates systematic theology; the heterodox contemns and vilifies it. The former maintains the carefully stated creeds of the evangelical denominations; the latter seeks to revise, relax, and nullify them. Orthodoxy defines Christianity to be an exclusive religion, distinct from all others, and intended to convert them; heterodoxy explains it to be a conglomerate of all religions, and destined to be merged and lost in them."

"There are no new truths, only new believers; and there are no new errors, only new errorists. W.G.T. Shedd recognized that the contest between truth and error is a constant reality of human history. In this miscellany he confronted the vigorous heterodoxy and apathetic orthodoxy of his day. This contest continues. The cast has changed but the script is the same, which makes this work as useful today as it was a century ago."