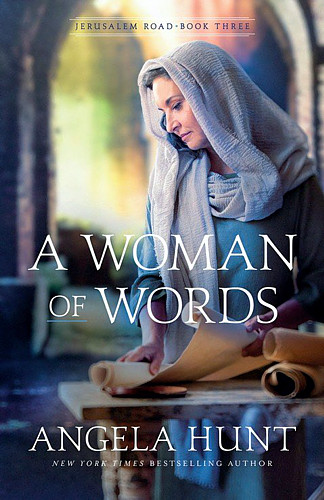 A Woman of Words, Jerusalem Road Series by Angela Hunt and published by Bethany House Publications.

Disciple Matthew, a former tax collector, is invited to work with Peter, James, and John in Jerusalem. He dreams of preaching and performing miracles like his fellow apostles, but he finds his dreams postponed because of a request from Yeshua's mother. Well aware of the passing years, Mary asks Matthew to help her record the stories of Yeshua while the eyewitnesses are still alive.

Reluctantly, he agrees, though the longer he and Mary work together, the more difficult their task becomes. Not only are they pressured by opposition from friends and foes alike, but Gaius Caesar, better known as Caligula, is determined to raise a statue of himself in the Holy Temple, even if it means killing every man in Israel. As Matthew works to save his people, Mary encourages him to come to terms with issues from his past. When they finally near the completion of their project, Matthew realizes that the job he reluctantly accepted might be his God-given destiny.