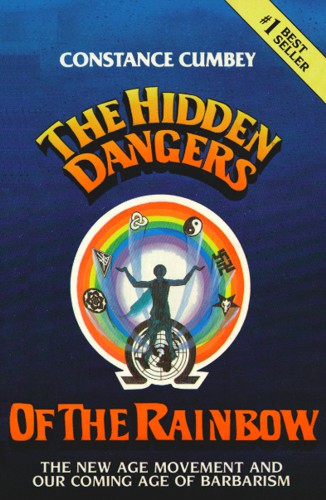 The Hidden Dangers of the Rainbow; the New Age Movement and our Coming Age of Barbarism by Constance Cumbey.

Although the rainbow seems to be only a colored arc of light refracted through raindrops, to both Christians and New Agers it has a deep meaning. According to the Bible, the rainbow is symbolic of God's everlasting covenant that he would never again destroy the earth by a flood. However, the New Age Movement uses rainbows to signify their building of the Rainbow Bridge (antahkarana) between man and Lucifer who, they say, is the over-soul.

New Agers place small rainbow decals on their automobiles and book stores as a signal to others in the Movement. Some people, of course, use the rainbow as a decoration, unaware of the growing popular acceptance of its occult meaning and the hidden dangers. "It is the contention of this writer that for the first time in history there is a viable movement — the New Age Movement — that truly meets all the scriptural requirements for the antichrist and the political movement that will bring him on the world scene. "It is further the position of the writer that this most likely is the great apostasy or 'falling away' spoken of by the Apostle Paul and that the antichrist's appearance could be a very real event in our immediate future."