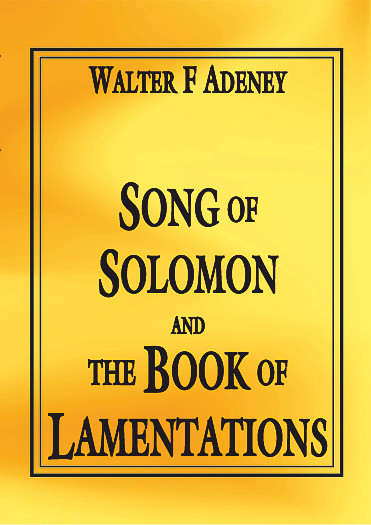 Song of Solomon and the Book of Lamentations - CCS by Walter Adeney and published by Classics Publishing.

From the Introductions... “The Song of Solomon is a puzzle to the commentator. Quite apart from the wilderness of mystical interpretations with which it has been overgrown in the course of the ages, its literary form and motive are subjects of endless controversy. There are indications that it is a continuous poem; and yet it is characterised by startling kaleidoscopic changes that seem to break it up into incongruous fragments. If it is a single work the various sections of it succeed one another in the most abrupt manner, without any connecting links or explanatory clauses.”

“The book which is known by the title “The Lamentations of Jeremiah” is a collection of five separate poems, very similar in style, and all treating of the same subject—the desolation of Jerusalem and the sufferings of the Jews after the overthrow of their city by Nebuchadnezzar. In our English Bible it is placed among the prophetical works of the Old Testament, standing next to the acknowledged writings of the man whose name it bears.

This arrangement follows the order in the Septuagint, from which it was accepted by Josephus and the Christian Fathers. And yet the natural place for such a book would seem to be in association with the Psalms and other poetical compositions of a kindred character. So thought the Rabbis who compiled the Jewish canon. In the Hebrew Bible the Book of Lamentations is assigned to the third collection, that designated Hagiographa, not to the part known as the Prophets.”