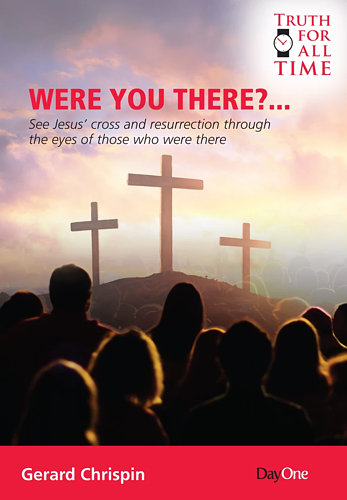 Were You There...? See the Cross and Resurrection Through the Eyes of Those Who Were There by Gerard Chrispin and published by Day One Publications.

What are the two most significant events in history? The Christian will say, ‘The death of Jesus on the cross and His resurrection from the dead.’ Gerard Chrispin’s book is like a witnesses’ waiting room at a trial.

Those appearing are eyewitnesses of either the horror of what happened on and around the cross, or of the staggering encounters with the risen Lord Jesus Christ three days later! Around the cross, we will meet: a politically motivated Roman governor, an illegally released murderer, a murderous mob, an African traveller forced to carry Jesus’ cross, women weeping there, two condemned prisoners dying with Jesus, godless religious rabblerousers, soldiers slandering Jesus, a Centurion supervising the crucifixion, a crowd whose mood changes dramatically as Jesus dies, the faithful women who dared to be there with the one male disciple, and the rich donor of his new tomb who buries Jesus in it.

After crossing a ‘Bridge’ highlighting four points about the cross and resurrection, then observe how the risen Christ appears to: the women who see Him first, Peter in his brokenness, two travellers on a road to Emmaus, the disciples (more than once), one of Jesus’ physical brothers, more than five hundred people at one time, the arch-doubter called Thomas, and the persecutor of Christians called Saul (later Paul). There were probably many more witnesses who could have been called, but the above room of witnesses would please any Lawyer at court who needed well-corroborated, first-hand evidence from credible witnesses.

This gripping book urges us to face the challenge of the question, ‘On whose side are you?’