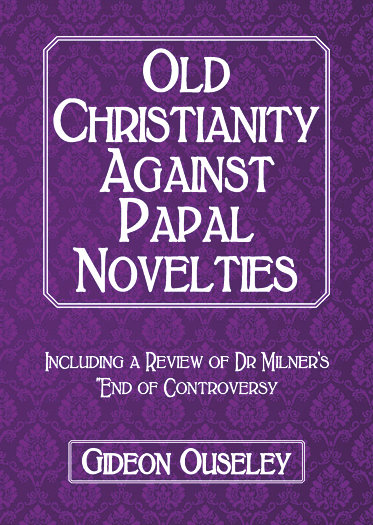 Old Christianity Against Papal Novelties by Gideon Ouseley and published by Classics Publishing.

Since all sincere Roman Catholics, and Protestants, believe that our Lord Jesus Christ taught the true religion wholly, and agree that his apostles taught it as perfectly as did He, and wrote the doctrine as accurately, though not so often as they taught it, (for this would be idle tautology,) and as both believe the New Testament is of divine inspiration, so must they believe that it has the whole doctrine which Christ first taught.

And in this they are the more confirmed, when, after all that has been said, no doctrine can be found in the one version, that is not, (self-contradictions avoided,) found in the other also. To deny therefore that Christ’s whole doctrine was thus divinely written, or that it is not in the New Testament, they must agree, involves instant infidelity, as being a daring denial of the apostles’ integrity and divine inspiration.