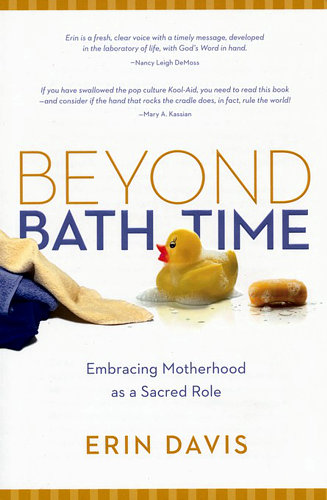 Beyond Bath Time: Embracing Motherhood As a Sacred Role by Erin Davis and published by Moody Publishers.

Where are you in the motherhood journey? Are you a new mom struggling to redefine the boundaries of your life among a sea of diapers, feedings, and sleepless nights? Have you been a mom so long that you’ve lost yourself along the way? Are you trying to decide if you want to have children?

Erin Davis was a young Christian wife who had made the decision to not have children. She had multiple degrees, a great husband, a promising career—she had it all, according to cultural standards. But most days she felt anything but fulfilled. In Beyond Bath Time Erin shares her journey to in responding to the call of motherhood. Women will be challenged, convicted, and wonderfully encouraged by Erin's honest and provocative look at motherhood. She unfolds the purpose and privileges of motherhood, revealing how it can be a powerful force for God’s kingdom

You Can Trust God to Write Your Story: Embracing the Mysteries of Providence

Reset - Living a Grace Paced Life in a Burnout Culture