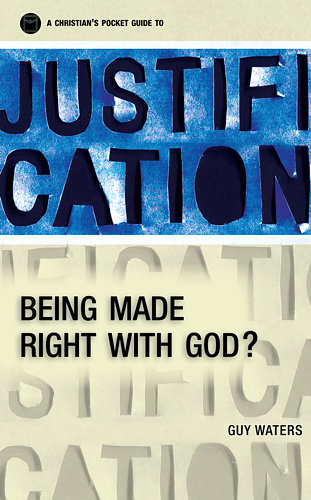 A Christian's Pocket Guide to Justification - CPGS, Being made right with God? by Guy Prentiss Waters and published by Christian Focus Publications.

Could you explain Justification if asked to? For many of us, the whole concept of justification is as mystifying as a foreign language, but yet Christians down the ages have fought to defend it - seeing it quite rightly as a vital element of how we are saved. But justification is not a relic of the past - it has direct relevance to us as Christians today. We often struggle with the thought of justification because of human pride; "I can't be that bad" and so justification is often undermined, wrongly presented or just plain ignored.

Scripture though, is brutally clear: we have a real problem - the prospect of our lives marred by wrong-doing being laid out before an almighty God who is pure and will not forever let wrong go unpunished. We can't earn our way out of our predicament - as this is just "rubbish" according to the apostle Paul. We need something else, someone who can take the hit we so richly deserve - leaving us to be declared innocent instead. This little book will help you grasp a truth that when understood correctly is explosive, transformational and utterly liberating.