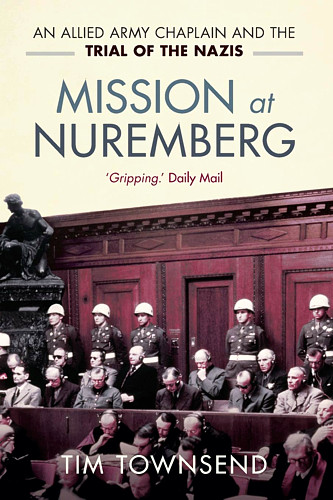 Mission at Nuremberg: An Allied Army Chaplain and the Trial of the Nazis by Tim Townsend and published by SPCK Publishing.

November, 1945. The war is over, Hitler is dead, and Allied Army Chaplain Henry Gerecke receives his most challenging assignment: to go to Nuremberg and minister to the twenty-one imprisoned Nazi leaders awaiting trial for crimes against humanity. Mission at Nuremberg takes us deep inside the Nuremberg Palace of Justice, into the cells of the accused and the courtroom where they faced trial. These twenty-one Nazis had sat at Hitler's right hand: Hermann Goering, Albert Speer, Wilhelm Keitel, Hans Frank, and Ernst Kaltenbrunner were the orchestrators, and in some cases the direct perpetrators, of the most methodical genocide in history.

As the drama leading to the court's final judgments unfolds, Tim Townsend brings Henry Gerecke's impossible moral quandary to life. Gerecke had visited Dachau and had seen the consequences of the choices these men had made, the orders they had given and carried out. How could he preach a gospel of mercy, knowing full well the nature of the atrocities they had committed? As execution day drew near, what comfort could he offer, and what promises of salvation could he make?

Detailed, harrowing, and emotionally charged, Mission at Nuremberg is a compelling new history of the Nuremberg trials, and an incisive investigation into the nature of sin, the price of empathy, and the limits of forgiveness.