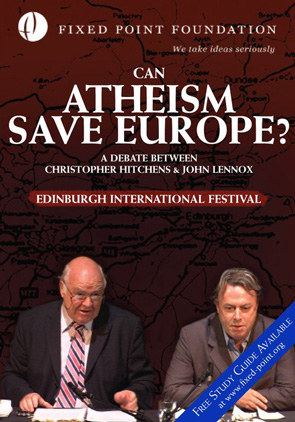 DVD - Can Atheism Save Europe? A Debate Between Christopher Hitchens And John Lennox and published by Fixed Point Foundation.

A New Europe is emerging from the old order and with it, a modern version of an old philosophy. Dubbed the 'New Atheism,' advocates are calling for the abandonment of Europe's religious heritage and the adoption of an aggressive secularism. Religion is detrimental to society, they argue. Indeed, in the words of Christopher Hitchens, it 'poisons everything.'

Some, such as Professor John Lennox, strongly disagree. They maintain that, far from undermining society, the preservation of religious thought, and Christianity in particular, is vital to the survival of Western civilization. All this leads to the inevitable questions: Should atheism replace Christianity in Europe? Does atheism have a better record than Christianity? And finally: Where would the New Atheism lead the New Europe?

A Lost God In A Lost World