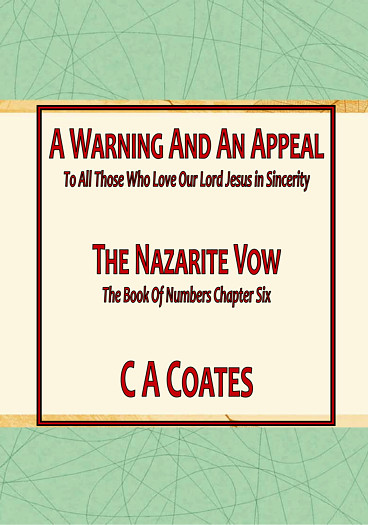 A Warning And An Appeal & The Nazarite Vow by C A Coates and published by Classics Publications.

These two papers by C A Coates are based on subjects which are never irrelevant or out-moded for believers for the subject matter is extremely important for the Christian of any age.

The first paper entitled “A Warning and An Appeal” was written to exhort and challenge to live out their faith not with mere rituals or outward appearance but to live in a Biblically consistent way – which is the appear - without being compromised by the world and the pressure of the world – which is the warning.

The second paper is called “The Nazarite Vow, from Numbers Chapter Six,” which looks in-depth at what it actually meant and how as Nararite was to live in Biblical times. Coates then compares the definition of the Nazarite to Christ Himself and then using the same principles teaches how we as believers should “consecrate ourselves unto the Lord” and live lives worthy of Him.