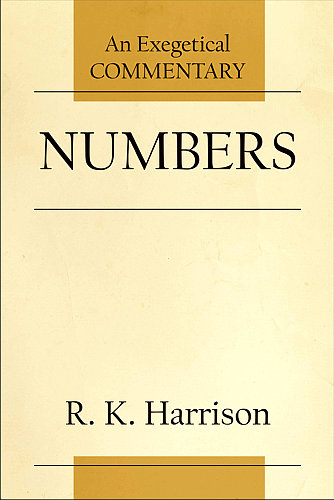 Numbers: An Exegetical Commentary by R.K. Harrison and published by Eerdmans. R. K. Harrison was one of the leading evangelical Old Testament scholars of the twentieth century. Well known for his Introduction to the Old Testament and his work as general editor of the New International Commentary on the Old Testament series, he also produced several valuable commentaries. In this volume, he applies his considerable skills to interpreting the book of Numbers, the fourth book of the Pentateuch.

"The book of Numbers is of pivotal importance for all Old Testament study because it covers the formative period of Israel's communal and religious life," notes Harrison in the introduction. "During this period, Israel's religious life was shaped by the promulgation of many laws from God that would establish the nature of her worship and prepare her for a settled community life beyond the confines of the wilderness."

Based on the Hebrew text, Harrison's insightful commentary provides a translation for each pericope, in-depth textual notes, explanations, and exposition. A concise introduction focuses on the place of Numbers in the Pentateuch and the wider canon, as well as its structure, compilation, authorship, and both textual and interpretive histories. Exposition sections interact with theological, archaeological, and historical scholarship.

The primary theme of the commentary is that Numbers represents a covenant-renewal document whose historical narratives graphically describe the Israelites' experiences and difficulties as Yahweh's chosen people.