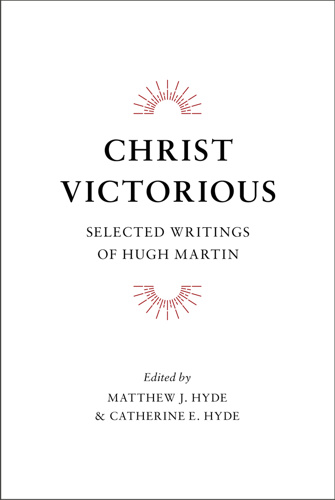 Death is often thought of as the inescapable terminus of life - something which, in the end, overpowers and conquers us. But in Christian theology, the death of Christ has central significance for our salvation. Christ died victoriously, conquering death and triumphing over his and our enemies. His death is our life.

This glorious truth occupied a large place in the thinking of Scottish theologian Hugh Martin (1822–85). Martin is best known for his mind-stretching books such as The Atonement and The Shadow of Calvary, and for his insightful character study of Simon Peter. But there exists a significant corpus of largely forgotten shorter writings from his pen which major on the significance of the cross of Christ.

This volume brings together a number of Martin’s sermons, essays and letters, many of which have not been published since the nineteenth century. Like his other titles, the pieces selected for this volume reveal an important theological thinker, one who is well able to guide his readers through various aspects of Christ’s atoning work. Yet Martin also writes with the heart of a pastor: his goal is always to lead his readers to a greater understanding of the truth, to a more complete trust in the Saviour, and to a more sincere worship of God.

The contents of this book demonstrate the veracity of the late Professor John Murray’s assessment of Martin , that ‘his writings exhibit an unexcelled warmth and fervour. No one could scale greater heights of sanctified eloquence.’

Sermons on Acts of the Apostles Ch 1-7