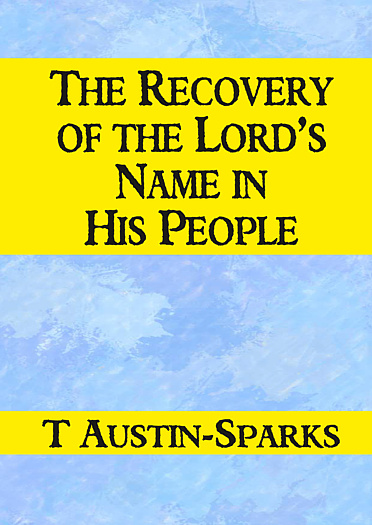 The Recovery of the Lord's Name in His People by T Austin-Sparks and published by Classics.

We resume our occupation with this matter of the recovery of the honour and glory of the Lord’s Name in His people. Just a few words to link up with what we were saying earlier when we were pointing out a certain correspondence between the time of Gideon and our own time. On the one hand a state of things amongst the Lord’s people, which is altogether contrary to the glory and honour of His Name, that state being weakness before their enemies, so largely at the mercy of their foes; defeat and helplessness. Then poverty, no real enjoyment of the wealth of the land which still was the land of promise and covenant, flowing with milk and honey, but not for them in their state – food very scarce and far to be sought.

Confusion – a big question continually dominating their minds as to the meaning of it all and as to the way out. Disintegration and confusion: no cohesion, no oneness, no solidity and without leaders to speak with that finality of authority in the Name of the Lord which would put new hope and new confidence into them. These were the conditions of Gideon’s time. And, as we have said, there is something like that today. We will not traverse that ground again to emphasise or prove it is true. But on the other hand, God moving in a Sovereign way for His Name’s sake, to recover its glory and its honour by changing those conditions; for the honour and glory of the Lord’s Name is in a people who are strong against their enemies, strong in the Lord and in the strength of His might.

Out of the Comfort Zone (Revised)