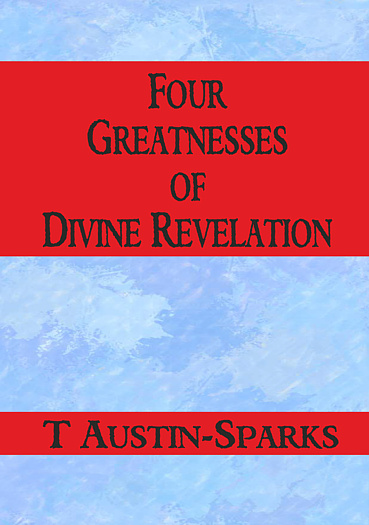 Four Greatness of Divine Revelation by T Austin-Sparks and published by Classics.

In Scriptures there are four great things. We might call them: ‘The Four Pillars of the Faith,’ ‘The Four Greatnesses,’ and we have covered them all in the two chapters which we have just read.

In type and principle they are:

* The Greatness of the Cross, as suggested by the altar and the immensity of the collective sacrifice

* The Greatness of the Church, the House of God

* The Greatness of the Word of God, indicated in these chapters at two points. Firstly, Solomon’s greatness was said to depend entirely upon his faithfulness to

the Word of God; and, secondly, David, in committing the pattern of the House to Solomon, said that he had received it all in writing from the Lord—it was the Word of God governing.

Those are the four great things of the Scriptures.