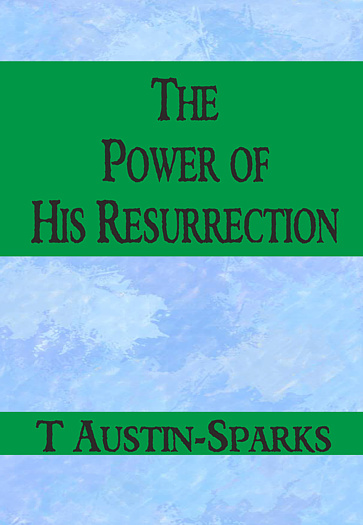 The Power of His Resurrection by T Austin-Sparks and published by Classics.

The second book of Kings has very largely to do with the life and ministry of Elisha, the prophet; and Elisha undoubtedly brings before us the Old Testament illustration and type of the Church living and working in the power of resurrection. We are familiar with the point at which the ministry of Elijah gives place to that of Elisha. When the Lord took up Elijah in a chariot of fire to heaven, Elisha's connection with that rapture, that ascension, was a matter of his being on the spot and seeing his master taken up, and of having fulfilled in himself the request that he should receive a double portion of the spirit of Elijah.

Elijah thus very clearly becomes a type of the Lord Jesus ascending, and the Holy Spirit as a double portion of His Spirit coming upon the Church, fulfilling His own words: "...greater works than these shall he do; because I go unto the Father." In the case of the Lord Jesus the Church followed, proceeding in the fullness of the Spirit to work out the ministry of Christ on a larger scale than He in the days of His flesh had been able to accomplish. His own prayer in those days was that the baptism with which He had to be baptized might be accomplished, because He had come to scatter fire on the earth. That scattering could not be until the baptism of the Cross was a realized thing, and He longed therefore for His emancipation from the limitations of the flesh. When that baptism of passion was fulfilled, and He was translated to the glory, the fire was scattered in the earth, and His desire was fulfilled through His Church; His limitations were removed.