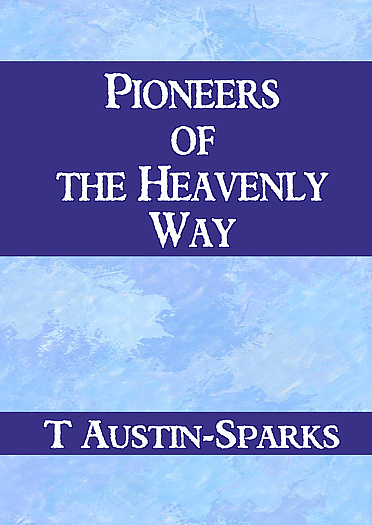 Pioneers of the Heavenly Way by T Austin-Sparks and published by Classics.

“These all died in faith, not having received the promises, but having seen them and greeted them from afar, and having confessed that they were strangers and pilgrims on the earth. For they that say such things make it manifest that they are seeking after a country of their own. And if indeed they had been mindful of that country from which they went out, they would have had opportunity to return. But now they desire a better country, that is, a heavenly: wherefore God is not ashamed of them, to be called their God: for he hath prepared for them a city" (Hebrews 11:13 - 16).”

Some time before these messages were given, desiring to be quiet and away from many things, I went down into the country with my heart very much to the Lord for His word. In the early hours of the morning it seemed as though the heavens opened and everything became alive: it all opened up wonderfully, and centred in one phrase – ‘Pioneers of the Heavenly Way’. That really does sum up the verses that we have just read, and, while we are going to think and perhaps say much about the heavenly way, it is this matter of pioneering the heavenly way that will be our main concern. It is necessary, to begin with, for us to consider to some extent the heavenly way itself, but I repeat that it is this whole tremendous business of pioneering that way that I believe to be the main concern of the Lord, and hence of ourselves, at this time.