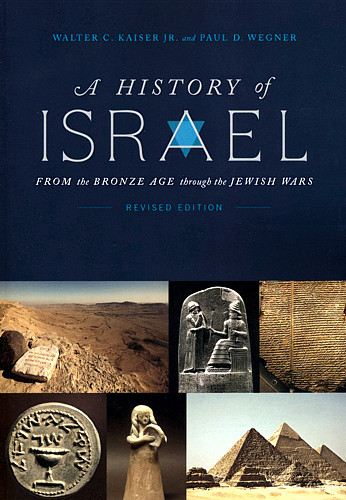 A History of Israel, From the Bronze Age Through the Jewish Wars, Revised by Walter Kaiser & Paul D Wegner and published by Holman Books.

Forwarding an up-to-date, conservative position on matters relating to ancient Israel's past from two distinguished Old Testament scholars, Walter C. Kaiser Jr. and Paul D. Wegner, A History of Israel, Revised Edition provides a comprehensive introduction to the history of ancient Israel—from the creation account in the Early Bronze Age through the Jewish Wars of the Intertestamental Period. This thoroughly revised edition focuses on Old Testament texts as well as ancient Near Eastern literary and archaeological sources to highlight important modern controversies surrounding this portion of Scripture. Topics treated include current approaches to the study of Israel's history, common fallacies in modern, secular biblical studies, and the evidence for the historical authenticity of the Old Testament accounts. This volume also includes over 600 photos, charts, and maps that serve as visual aids.

With clarity and skill, Kaiser and Wegner not only carefully defend the historicity of Scripture, but also successfully situate the redemptive history of the Old Testament in its broader ancient Near Eastern context. For all serious students of the Bible—from students and scholars to pastors and informed lay-readers—A History of Israel is an accessible, well-organized, fascinating, and invaluable resource.