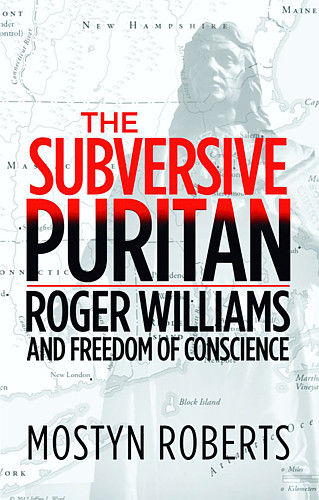 The Subversive Puritan: Roger Williams and Freedom of Conscience and Church and State by Mostyn Roberts and published by Evangelical Press.

How shall we live together in the light of our very deep differences? Christian author Os Guinness has said this is the greatest problem facing the United States today and the same could be said for ‘the West’ as a whole. Can a seventeenth-century Calvinist contribute anything? In recent years a number of authors, popular and academic, Christian and secular, have found inspiration in Roger Williams, the rebel Puritan exiled from Massachusetts who founded Rhode Island. He made the new little state a haven for those ‘oppressed for conscience’ and wrenched church and state further apart than was anywhere known at that time. Its Charter was the first in the world to protect liberty of conscience.

Williams is rewarded with a statue at the Reformation Wall in Geneva, yet he remains strangely unknown today, even by those who stand broadly in his religious heritage. At the level of biography, history, theology, political philosophy or the human rights debate, this book will inform, stimulate, provoke and possibly irritate—but Roger Williams is well worth introducing to the discussion as we face changing times in church and society.

Doctrine: What Christians Should Believe (Re: Lit Books)