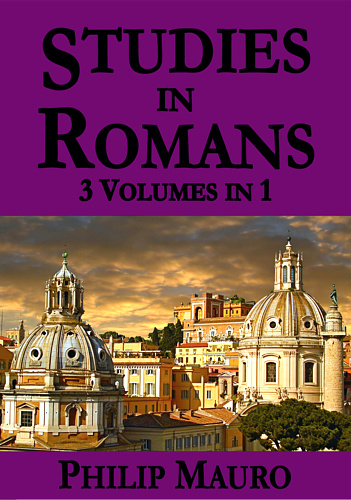 Studies in Romans, Three Volumes in One - CCS by Philip Mauro and published by Classics.

Philip Mauro loved the Lord Jesus Christ above all else and he loved the scriptures just as much. As he grew in stature as a believer, his views on certain subjects changed as he received more light and revelation from God. He chose to acknowledge his mistakes and to retract his opinions rather than to seek the approval of man by clinging to his previous position. He become a prolific writer, sharing the new light he had received. As a result, many friends turned against him, labelling his views “revolutionary” yet he remained undeterred. With his motto, “scripture interprets scripture”, and a subsequent significant library of writings as his greatest legacy, Philip Mauro is the ideal Christian role model – a “simple soul” who took God at his word and lived the word.

In this work Philip Mauro opens up the Book of Romans so that any one who read this book will have a comprehensive understanding of this crucial biblical book.

In this volume, there are three sections:

Part Three: The Wretched man and His Deliverance – Romans 7