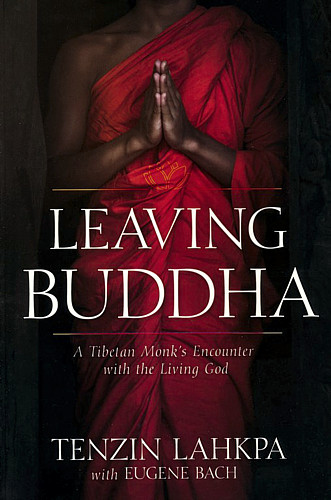 Leaving Buddha: A Tibetan Monk's Encounter with the Living God by Tenzin Lahkpa with Eugen Bach and published by Whitaker House.

When Tenzin Lahkpa is fifteen years old, his parents give him over to a local temple in Tibet as an offering. Unable to change his fate, he wholeheartedly embraces his life as a monk and begins a quest for full enlightenment through the teachings of Buddhism. From his local monastery to the famed Potala Palace in Lhasa, Tibet, he learns deep mysteries of Tibetan Buddhism. Yearning to study with the current Dalai Lama, he eventually escapes from China by means of an excruciating, two-thousand-mile, secret trek over the Himalayas—barefoot, with no extra gear, changes of clothing, or money. His dream is realized when he finally sits under the Dalai Lama himself. But his desire to go deeper only grows, leading him to unexpected... Follow the fascinating, never-before-told, true story of what causes a highly dedicated Tibetan Buddhist monk to make the radical decision to walk away from the teachings of Buddha and leave his monastery to follow Jesus Christ. Discover the reasons other monks want him dead before he can share his story with others. Leaving Buddha dares to expose the mysterious world of Tibetan Buddhism, with its layered teachings, intricate practices—and troubling secrets. Ultimately, it tells a moving story about the search for truth, the path of enlightenment, and how no one is beyond the reach of a loving God. This gripping narrative will resonate with people from all backgrounds and nations.

The Deadly Deception, Freemasonry Exposed By One Of Its Leaders

Counting the Cost, Kidnapped in the Niger Delta

An Open Door, A True Story of Courage in Congo

If - What do I know of Calvary Love?