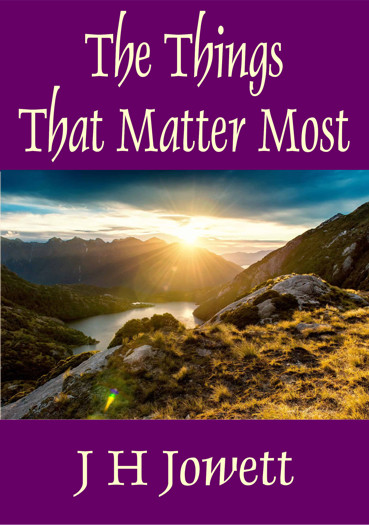 The Things that Matter Most by J H Jowett and published by Classics.

John Henry Jowett was one of the most beloved preachers of the early 20th century. His sermons boasted a fine balance of practicality, expressiveness, and depth of knowledge; Jowett had a rare ability to relate to almost every congregant from his pulpit. The 1907 issue of British Weekly, after surveying its readership, ranked Jowett as Britain's “most appealing preacher,” over and above even F.B. Meyer, G. Campbell Morgan, and others.

In 1913, Jowett published “Things That Matter Most”, a collection of short devotionals. “In these days of incessant movement,” his preface reads, it serves us well "that we have interludes when the soul can correct her conscious and unconscious wanderings by the contemplation of the serene and majestic things of God." Meditating on sin, grace, redemption, and developing the Christian life, “Things That Matter Most” gives readers a place to pause and listen for God’s voice.