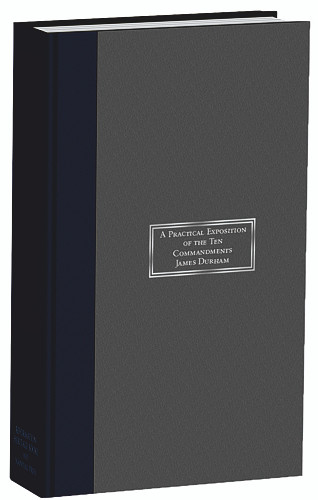 A Practical Exposition on the Ten Commandments by James Durham and published by Reformation Heritage Books.

Of the works of James Durham, this exposition of the Ten Commandments was reprinted most often. As with his sermons, it is filled with perspicuous opening of the Word, practical application, and the clearing of “several momentous questions and cases of conscience.” The only regret is that because he was preaching similar material at the time, the coverage of these lectures on the first table is lengthier than the coverage of the second table. Nevertheless, the work has always been held in high regard, and the in-depth treatments of the second, third, and fourth commandments commend it and make it particularly useful today when the Lord’s name, worship, and day of worship are much abused. After 1802, this work was not reprinted again until the Naphtali Press edition of 2002. This new edition has been carefully collated and checked against the first and early editions and the text corrected and notations considerably augmented.

A Brief Account of Life & Labours of George Muller