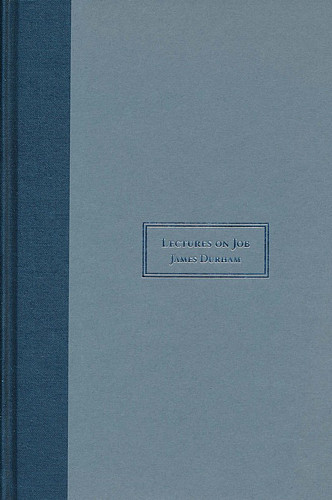 Lectures on the Book of Job by James Durham and published by Reformation Heritage Books. The great admirer of Puritan commentaries was correct on all counts. James Durham’s Lectures on the Book of Job was published from a manuscript in 1759, one hundred years after his death, in what must be one of the rarest Puritan commentaries to obtain in an original edition. It was probably prepared for the press by Robert Wodrow, the son of the famous historian of the same name, who collected a massive number of manuscripts, though the manuscript on Job is not known to be surviving at this time. Often Puritan commentaries were huge productions, like Joseph Caryl’s mammoth twelve volumes on Job. Yet Durham’s work is compact, with a few pages of exposition and comment, closing with a few pages of practical observations. This makes the work perfectly suitable for private and family devotions.

And even though Spurgeon had not seen Durham’s commentary, it was an astute decision to include his above entry in the large print reserved for those commentaries he highly recommended. Dickson’s impression of Durham’s preaching generally was that, as paraphrased by the elder Wodrow, while it is not known for turns of phrase, it is filled with “much good and great matter,” as are any of his works. After 1759, this work was not reprinted again until the Naphtali Press edition of 1995 (and reprinted 2003). This newly revised edition has been carefully compared again to the original and corrected and updated.

The Works of William Perkins - Volume 3

Joseph: The Hidden Hand of God

The Works of William Perkins, Volume 4

How to Understand and Apply the Old Testament