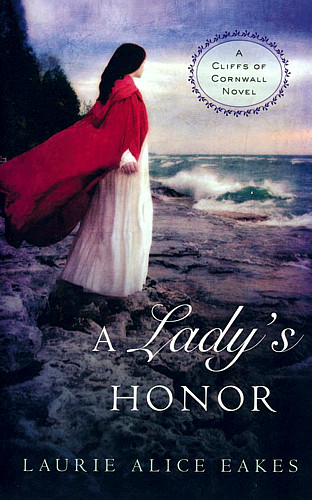 A Lady's Honor, Cliffs of Cornwall Series by Laurie Alice Eakes and published by Zondervan.

Elizabeth must realize her worth doesn't lie in her inheritance. In order to avoid a forced marriage to a dangerous man, Elizabeth Trelawney flees London. An unexpected stranger arrives to help her, and as they elude her pursuers across Cornwall in the night, Elizabeth realizes her rescuer, Rouan Curnow, is familiar. Their differences in social status kept Rouan from pursuing a courtship with the lady his heart wouldn't let him forget. Now because of dangerous smugglers and local murders, the two are plunged into a reckless alliance that rattles Rouan's fledgling faith in God. The closer they get to Bastian Point - Elizabeth's true home - the more she realizes it is the only place she longs to be.