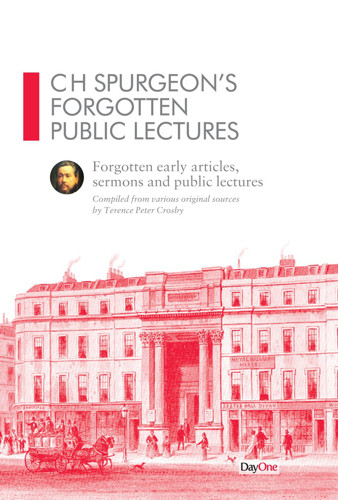 ‘If all Mr Spurgeon’s notable public addresses could be collected, they would fill several substantial volumes, and would furnish a large constituency with a mass of interesting reading on a great variety of subjects.’ (C H Spurgeon’s Autobiography Vol. 3, p. 66).

Though known mainly for his sermons, Spurgeon was also a prolific writer and public speaker. In addition to Speeches at Home and Abroad, a collection of eighteen addresses delivered between 1861 and 1878, published in 1878 and reprinted by Pilgrim Publications, biographies and bibliographies of Spurgeon refer to numerous other public lectures and addresses, many of which were published at the time, but have long since been out of print; in recent years five of these have been reprinted by Pilgrim Publications.

The purpose of this volume is to reintroduce eleven forgotten early articles, four otherwise unpublished early sermons and fifteen more of the public lectures, the latter of which appear to be extremely rare in their original editions and have largely been forgotten except for their titles.

Born of God, Sermons from John Chapter One

John Knox and the Reformation