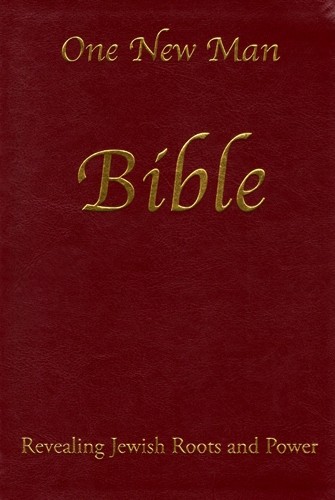 The One New Man Bible brings a greater understanding of and appreciation for the power given to believers for their daily walk. The Jewish Roots of Christianity come to life in The One New Man Bible. Hebrew is a very expressive language, so this translation brings out much of the power that has commonly been omitted from traditional English translations.

The One New Man Bible includes more than 4,000 footnotes and the massive one hundred seventy page Glossary describes various first century Jewish customs and explains Hebrew Scriptures, such as Leviticus 14, which on the surface is about cleansing a leper, but has a much deeper meaning. Many Jewish sources were studied to bring the Scriptures to life, including many modern as well as ancient Jewish commentaries. Those studies bring real depth to the subjects in the Glossary, but even more importantly they give insight into the thinking of the New Testament authors, the Apostles, and especially Y'shua. It is important for those of us reading in the twenty-first century to understand what a word or expression meant to those who wrote the passages in Bible times.