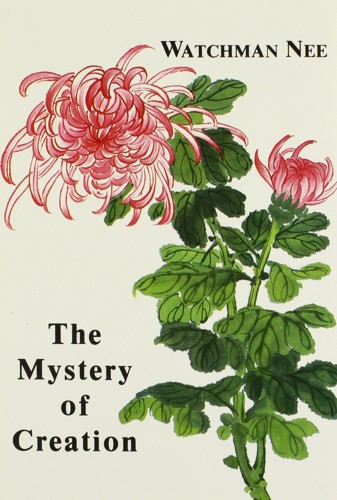 The Mystery of Creation by Watchman Nee and published by Christian Fellowship Publisher.

Man always wonders about himself as well as the things that surround him. He has tried for centuries to unlock the mystery of creation by observation and speculation. Yet the true story of creation would never have been told had not God revealed it to Moses. The challenge of God to human inquiry and research is the same today as it was in the days of Job: "Who is this that darkeneth counsel by words without knowledge? Gird up now thy loins like a man; for I will demand of thee, and declare thou unto me. Where wast thou when I laid the foundations of the earth? Declare, if thou hast understanding. Who determined the measures thereof, if thou knowest? Or who stretched the line upon it? Whereupon were the foundations thereof fastened? Or who laid the corner-stone thereof, when the morning stars sang together, and all the sons of God shouted for joy?" (Job. 38.2-7)

In this volume, Watchman Nee presents to us a Biblical interpretation of creation to which science attests. This is not meant to prove, however, that the story of creation as revealed in the Bible is scientifically true but to show instead that God is greater than science. Whereas God's word is forever true, the discipline of science must constantly be revised.

How inexhaustible is God's revelation, that in giving the history of creation (as found in the letter of His word) He has also disclosed His principles of working in the New as in the Old Creation. Hence an analogy of creation and Christian experience, an analysis of creation and the acts of Christ, and an anatomy of creation and dispensation are additionally presented in order to lead us into the spirit of God's word.

Practical Issues of This Life

The Word Of The Cross

The Character of God's Workman