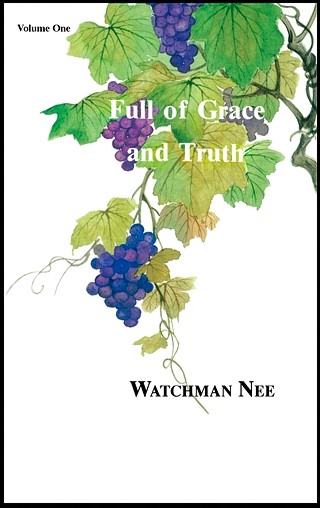 Full of Grace and Truth, Volume 01 by Watchman Nee and published by Christian Fellowship Publishers.

In the early days of his anointed ministry, especially in the late 1920's and early 1930's, Watchman Nee was greatly used by the Lord in preaching the gospel of Jesus Christ, thereby winning many souls to the Lord. Though gradually he began to spend more time in building up the believers, and eventually towards the end of his active ministry in the late 1940's he seemed to be occupied with ministering to those who ministered, he nevertheless remained at all times a herald of the glorious gospel of salvation. In the present volume, eight of the gospel messages which he gave in his early years have been selected to form a fuller presentation of the gospel of Jesus Christ. They are translated from the Chinese and appear in English for the first time. May the Spirit of God speak to the hearts of all who read this book and bring them into the glorious freedom which only Christ can give.