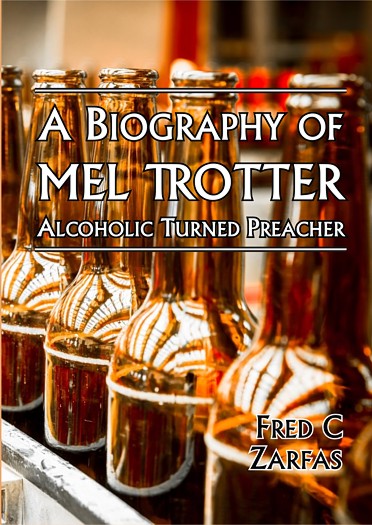 A Biography of Mel Trotter, Alcoholic Turned Preacher by Fred C Zarfas and published by Classics.

“If I wanted to build a house, I would go out into the forest and elect the best type of tree I could find to get as nearly as possible the sort of lumber I wanted out of which to build my house. I might not be able to get a perfect tree, but I would do the best I could. That seems to be what God does. He gets the best man He can find to do the job He wants done.” God knew what He was doing when the Holy Spirit pulled Mel Trotter, a drunken bum, into that Chicago mission one night and made him see a way out of his drunkenness and sin and then called him to preach to other poor, helpless sinners. A few years after Mel Trotter's conversion, nobody would have ever known that Mel had been an “alcoholic bum” unless he told them.

Mel was no ordinary man He was born into this world a sinner. He was born again and made a child of God, and God took the native ability that He had given Mel when he was born the first time and used him as few men have ever been used. Many have often thought that they would like to have been in heaven when Mel walked in. If he was anything in heaven as he was down here, they can imagine he said, “Jesus, it was wonderful of You to save me. I am sorry I wasn’t a better Christian and a better preacher, but, Jesus, I sure do love You.”