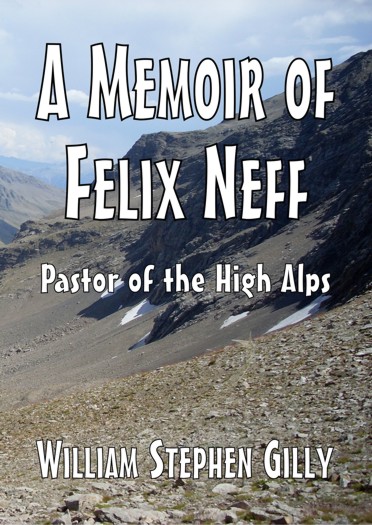 A Memoir of Felix Neff, Pastor of the High Alps by William Stephen Gilly and published by Classics.

Felix Neff (8 October 1798 – 1829), was born at Geneva. Originally a sergeant in an artillery regiment, he decided in 1819 to devote himself entirely to evangelistic work. He was ordained to the ministry in 1822, and soon afterwards settled in the valley of Freissinières, where he laboured in the manner of J. F. Oberlin, being at one and the same time pastor, schoolmaster, engineer and agriculturist. He was so successful that he changed the character of the district and its inhabitants. In 1827, worn out by his labours, he was obliged to return to his native place, where he died two years later.

This memoir of Felix Neff is the fifth that has appeared before the public. Of these Memoirs, one only is a translation; the rest having been published in different languages, and entirely unconnected with each other: one in French, two in English, and one in German. What an unusual degree of respect is here shown, for the memory of a man, comparatively but little known during his life time; for the noble and energetic character of Neff was so free from ambition, that with a brilliancy of talent which would have done honour to a higher station, he was content to pass his days among obscure shepherds. It might almost be said, that he died before even those who knew and loved him best, had time to discover and appreciate his character to its full extent.