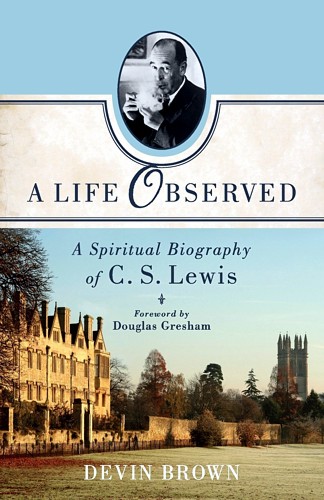 A Life Observed: A Spiritual Biography of C S Lewis by Devin Lewis and published by Faber Publishing.

C. S. Lewis is one of the most influential Christian writers of our time. The Chronicles of Narnia has sold more than 100 million copies worldwide and all Lewis's works are estimated to sell 6 million copies annually. At the fiftieth anniversary of his death, Lewis expert Devin Brown brings the beloved author's story to life in a fresh, accessible, and moving biography through focusing on Lewis's spiritual journey.

Although it was clear from the start that Lewis would be a writer, it was not always clear he would become a Christian. Drawing on Lewis's autobiographical works, books by those who knew him personally, and his apologetic and fictional writing, this book tells the inspiring story of Lewis's journey from cynical atheist to joyous Christian and challenges readers to follow their own calling. The book allows Lewis to tell his own life story in a uniquely powerful manner while shedding light on his best-known works.