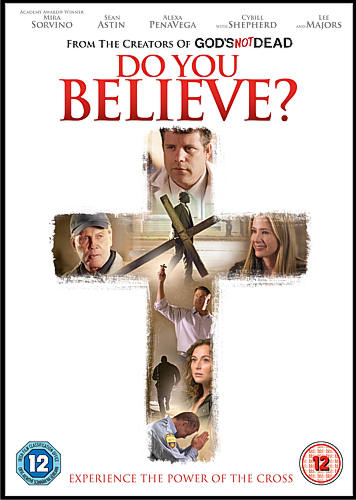 DVD - Do You Believe? published by Kingsway Trust.

Do You Believe? is an ensemble drama that follows that pain and perseverance of different men and women who encounter the titular question, the film is a challenging drama and great resource for Church and family movie nights.

When a pastor, one late night, is driving home he encounters an old street preacher who's literally carrying his cross. When asked the titular question, the pastor gives the obvious response. Yes. "If you believe, then the question is, what are you going to do about it?" the old man replies.

The films central challenge, acting on faith sets into motion stories which cross and recross. Stories of hope and despair, of persecution and perseverance, or seeing the world with God's eyes and living as a response to that shift. Do You Believe is a film that demands a response. It addresses real issues in the world, both secular and spiritual, and explores how we can live out belief.

Whether it's a paramedic seeking to save someone on the cusp of death, or a young man torn between his violent past and an uncertain future, or a doctor with a God complex, the film's character each have something to say. They speak of the need not only to say 'I believe', but to follow those words with actions.