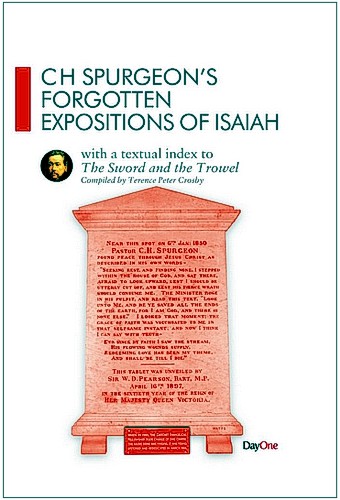 As well as being the source of several of Spurgeon’s books, The Sword and the Trowel also contained much material which has otherwise remained unpublished for a century. The longest series arranged after Spurgeon’s death consisted of nearly fifty expositions of the prophecy of Isaiah which appeared in The Sword and the Trowel between February 1905 and August 1909. Some of these consist of otherwise unpublished material, but most were compiled from expositions and sermon extracts taken from The New Park Street and Metropolitan Tabernacle Pulpits.

The expositions are here reproduced with the desire that they should be a useful addition to Spurgeon’s larger works of consecutive teaching, namely The Treasury of David, his exposition of the Psalms, and The Gospel of the Kingdom, his commentary on Matthew. Gaps in the material to be found in The Sword and the Trowel have been filled wherever possible by the incorporation of other expositions originally appended to sermons in the posthumous volumes of The Metropolitan Tabernacle Pulpit.

Why Are You Here?

The Lord's Supper as a Means of Grace