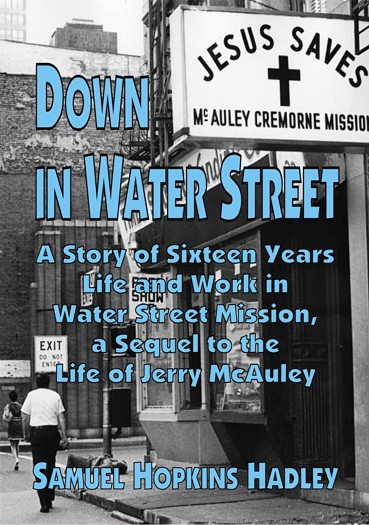 Down in Water Street by Samuel Hopkins Hadley and published by Classics.

Three and a half years only had elapsed since the first edition of “Down in Water Street” appeared, when on February 9, 1906, the author was suddenly called to his coronation. The funeral services were exceptionally impressive as they were unusual, the honorary pallbearers including men of greatest prominence in the commercial and civic life of New York city. The audience comprised the greatest contrasts in social life. Redeemed men were there in great number, but there were also many slaves of an as yet unconquered appetite who had often listened to Mr. Hadley's appeals and now felt that their one untiring friend had gone.

Some years before Mr. Hadley's death he had especially requested that in the event of his being called away first, the Rev. J. Wilbur Chapman should speak at his funeral services. It is therefore most fitting that Dr. Chapman's remarks should be added to this new edition (the twelfth) as an appropriate close to a volume which in a very

true sense is the author's autobiography