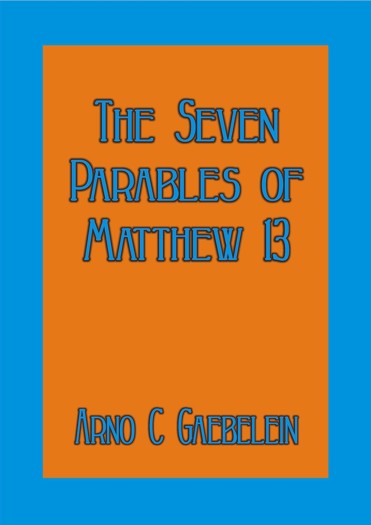 The Seven Parables of Matthew 13 - CCS by Arno Gaebelein and published by Classics.

The thirteenth chapter in the Gospel of Matthew contains seven parables, which the Lord Jesus Christ uttered, after His people had rejected the message of the kingdom. This chapter is one of the greatest importance. It demands, therefore, our closest attention, and this more so because the revelation which our Lord gives here, the unfolding of the mysteries of the kingdom of the heavens, has been and still is grossly misunderstood and falsely interpreted. Precisely that which our Lord did not mean has been read into this chapter.

The whole chapter has been, so to speak, turned upside down by most of the learned commentators of Christendom. For any believer to turn to these for light and instruction will only result in getting thoroughly confused. It may be said if this chapter would be rightly understood by the professing church, the consequences would certainly be the most far-reaching. But one almost despairs of seeing the true meaning of the mystery of the kingdom in Matthew XIII believed in Christendom.