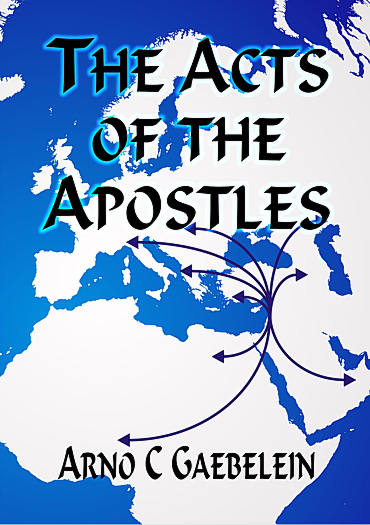 The Acts of the Apostles - CCS by Arno C Gaebelein and published by Classics.

The book known by the name “The Acts of the Apostles” follows the four Gospel records. This is its proper place. The oldest Manuscript, the Sinaiticus dating from the Fourth Century gives the title simply as “The Acts." The books of the New Testament have been correctly divided into five sections, corresponding to the first five books, with which the Bible begins, that is the Pentateuch. The four Gospels are the Genesis of the New Testament. Here we have the great beginning, the foundation upon which the subsequently revealed Christian doctrines rest.

The Book of Acts is the Exodus, GOD leads out from bondage a heavenly people and delivers them. It is the great historical book of the New Testament describing the beginning of the church on earth. The Pauline Epistles are the Leviticus portion. Holiness unto the Lord, the believers separation and standing in CHRIST, what believers have and are in CHRIST by whose blood they have redemption, is the core truth of these Epistles.

The Epistles of Peter, James, John and Jude, known by the name of the Catholic Epistles, are for the wilderness journey of GOD's people, telling us of trials and suffering; these correspond to the Book of Numbers. The Book of Revelation in which GOD's ways are rehearsed and a review is given of the entire prophetic Word concerning the Jews, the Gentiles and the Church of GOD has the same character as Deuteronomy.

The Book of Hebrews - CCS

The Plagues of Corinth

Prayers of the Saints