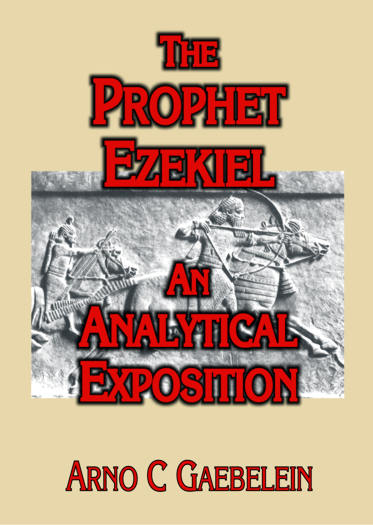 The Prophet Ezekiel: An Analytical Exposition by Arno C Gaebelein and published by Classics.

From the opening verses of the Book, which bears the name of the prophet Ezekiel, we learn that he was the son of Buzi the priest, and belonged consequently to the much honoured Zadok family. That he knew the nobility of Jerusalem well and was intimate with them may be indirectly learned from the eleventh chapter. Rabbinical tradition identifies Buzi (which means “contempt”) with Jeremiah and makes him a son of that prophet. There is, however, no positive evidence for this.

Gaebelein writes "A careful reading of the Book of Ezekiel shows, in the first place, that the Prophet received messages and saw visions before the final destruction of Jerusalem, and after that catastrophe had taken place in fulfillment of his inspired predictions he received other prophecies. The predictions preceding the fall of Jerusalem are the predictions of the judgment to fall upon the city and upon Gentile nations, the enemies of Israel. The predictions Ezekiel received after the city had been destroyed are the predictions of blessing and glory for Israel and Jerusalem in the future. The first part of the book has found a fulfillment in the destruction of the city by Nebuchadnezzar.

The second part is awaiting its fulfillment at the close of the times of the Gentiles, when Israel will be regathered, restored and the glory of the Lord returns to another temple, which Ezekiel beheld in a magnificent vision. All will be accomplished when the Lord returns to dwell in the midst of His people, so that the name of the city will be "Jehovah-Shammah"—"the Lord is there" (chapter xlviii:35). These two main divisions are clearly marked in the book itself. In chapter xxxiii:21, after the Prophet had received a renewed call as watchman. We read: "And it came to pass in the twelfth year of our captivity, in the tenth month, in the fifth day of the month, that one that had escaped out of Jerusalem came unto me, saying, The city is smitten."

The Hope of the Ages