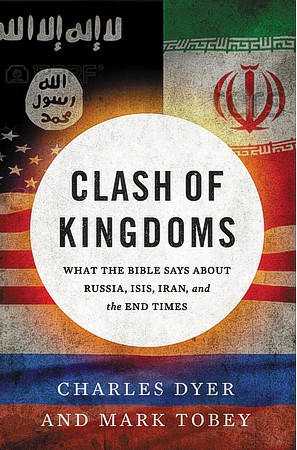 Clash of Kingdoms, What the Bible Says about Russia, ISIS, Iran & the Coming World Conflict by Charles Dyer & Mark Tobey and published by Thomas Nelson.

ISIS, Russia, and Iran are daily atop headlines and are among chief sources of intensifying unease among Americans about how current world conflicts will unfold. Using the Old Testament texts of prophets Ezekiel and Daniel as foundational passages, Bible experts Charles Dyer and Mark Tobey explain the connection between Bible prophecy and real-time events such as the growing alliance between Russia and Iran; the unsettling of the region as ISIS ravages countries and redraws boundaries; and the pull of Turkey and Saudi Arabia into the fray by Russian encroachment, Iranian meddling, and the United States’ inability to create and lead a coalition.

Simultaneously, Dyer and Tobey provide practical encouragement and spiritual principles for finding comfort, strength, and perspective in an unsettling time while laying out a strategy for responding out of faith rather than fear in the face of end times concerns.

Israel and The Blessing of the Tribes

Prophecy in Light of Today