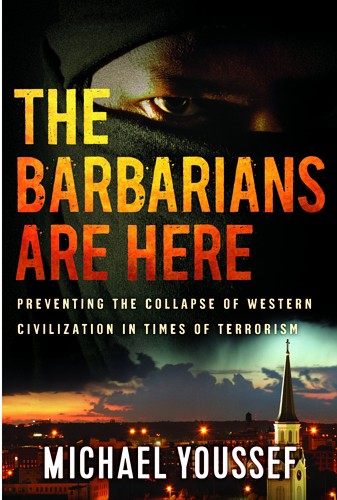 The Barbarians Are Here, Preventing the Collapse of Western Civilization in Times of Terrorism by Michael Youssef and published by Worthy Publishing.

For decades, Americans were vaguely aware that Islamist barbarians were in the deserts of the Middle East and in the mountains of Afghanistan and Pakistan, executing "infidels" and raiding villages with unrecognizable names. But the Muslim world seemed far away, remote, and irrelevant to our daily lives. Then came the terrorist attacks of 9/11, followed by attacks at Fort Hood, the Boston Marathon, San Bernardino, and more. Now terrorists seem to be emerging everywhere, unleashing senseless death and destruction on our nation. They are here, and their goal is nothing less than global conquest.

Motivated by ancient prophecies, they are flooding into Western countries determined to conquer our countries and establish a global Muslim caliphate. In The Barbarians Are Here, Dr. Michael Youssef provides clear insight into the motives and mission of the Islamic extremists. He offers practical steps we can take right now to begin a New Reformation that will restore the hope of Western civilization. It's not too late. We are not doomed to destruction, even though the barbarians are already here. But we haven't a moment to lose.

The Case for Christianity Answer Book

CD - For Zions Sake I will not be Silent