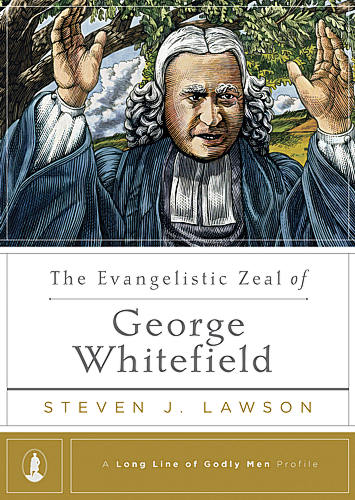 The Evangelistic Zeal of George Whitefield, A Long Line of Godly Men Series by Steven Lawson and published by Reformation Trust.

England in the seventeenth and early eighteenth centuries was in the midst of spiritual decline, marked by lifeless sermons, strife, persecution, and malaise. Into this dark time, George Whitefield burst forth as one of the greatest preachers the church had seen since the time of the Apostles.

Called the “Grand Itinerant” for his unprecedented preaching ministry, Whitefield crossed the Atlantic Ocean numerous times and lit fires of revival on two continents. Yet, as Dr. Steven J. Lawson illustrates in this latest entry in the Long Line of Godly Men Profiles series, we must note that Whitefield was a man whose extraordinary evangelistic fervor was marked by remarkable piety and deep theology, and whose unswerving devotion to his God led him to risk all that he had to preach the name of Christ.

Jonathan Edwards on Lover of God **