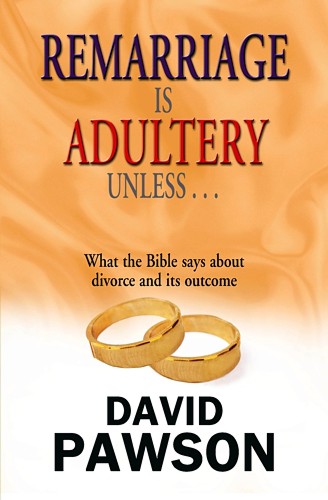 Remarriage Is Adultery Unless... by David Pawson and published by Anchor Recording Limited.

Consecutive polygamy (as many husbands or wives as you like but only one at a time) is now an accepted norm in contemporary society. Hardly surprising, since the social, legal, moral and financial restraints holding marriages together for a lifetime have been steadily eroded in a relativist age where anything goes. What is surprising is that divorce and remarriage are becoming as common inside the church as outside, even among Christian leaders and especially in the Evangelical stream.

Believers have been outspoken about such issues as abortion and homosexuality though their Lord Jesus said nothing about either. He did say quite a lot about the subject of this book but there is either a reluctance to take his teaching at face value or an eagerness to enlarge his 'exception' until it becomes the rule. This volume primarily appeals to those for whom the Bible is the final authority in all matters of belief and behaviour, especially those who preach to, teach and counsel others. The author believes that the church should be leading the world uphill rather than following the world downhill.