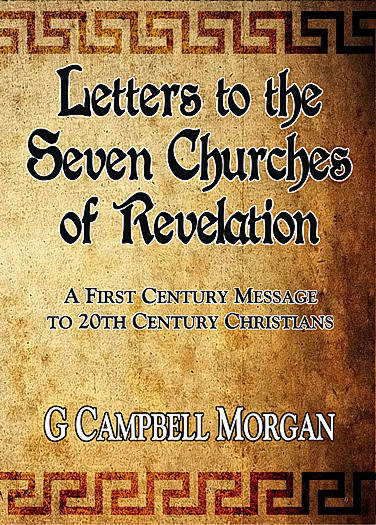 Letters to the Seven Churches of Revelation, A First Century Message to 20th Century Christians by G Campbell Morgan and published by Classics.

In order to a proper understanding of the purpose of the letters to the churches of Asia, it is necessary that some word should be spoken concerning the book in which they are to be found. This book contains the last messages of Christ to men. In some important ways it differs from any other in the Divine Library. John did not receive it by the inspiration of the Spirit in the ordinary sense of that expression, but directly from Jesus Christ, as He appeared to him while in exile in Patmos.

Perhaps no book has been more neglected than this Revelation of Jesus Christ, and yet it the only one that opens with a distinct and three-fold blessing pronounced, a blessing first, upon those who read, secondly, upon those who hear, thirdly, upon those who keep the things that are written therein. There must be some deep significance in this introductory pronouncement, and because of the difficulty of interpretation, the Church has no right to neglect her Master's last message.

Yet while it is true that no book has been so sadly neglected, it is also true that around no book has there waged more persistent controversy. So keen has that controversy been, that we find Christian people divided into distinct schools of thought about it, and we hear of Preterist, Presentist, Futurist, and Spiritual interpretations. These differences have no detailed place in our present discussion. Our business lies only with the messages to the churches.

The Duties of Parents