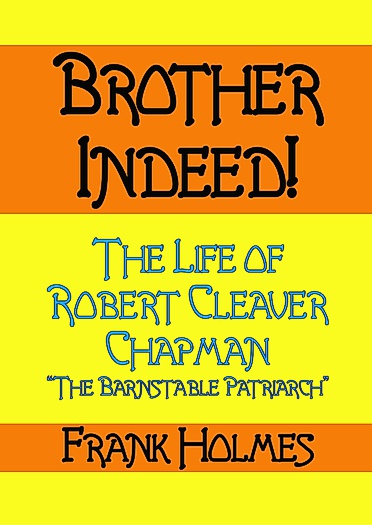 John Nelson Darby rebuked some young Christians who, criticized Mr. Chapman. In his rebuke he is reported to have said, “I don’t want to hear anything said against Mr. Chapman. He practises the things that I preach”. This is an excellent testimony from a man of God to a man of God. Frank Holmes in his life of Mr. Chapman describes him as the ‘Barnstaple Patriarch’.

Robert Cleaver Chapman was drawn to religion and was deeply influenced by a preacher, James Harrington Evans. Although he managed to set himself up as a solicitor in Throgmorton Street, he spent much of his time preaching and visiting the poor in the districts off Gray’s Inn Lane and Theobald’s Road. Yet after years of deliberation, in 1832 he sold all his possessions and gave away all rights to the private income he received from his family. He moved to Barnstaple, where he became a preacher at the Ebenezer Strict Baptist Chapel.

Chapman eventually settled in a house called 6, New Buildings, Barnstaple, where he lived a simple life and ran an almost open house to guests. He was noted for his frugality and his habit of cleaning the shoes of all his visitors. He ran a small woodworking shop at the rear, where he made things to sell for missionary funds. He was not actually a Strict Baptist, but believed in a wider community of religion. He believed in missionary work and undertook trips to Ireland and to Spain to spread God's word.

From Pentecost to Patmos

Jesus and the Gospels: Introduction & Survey *