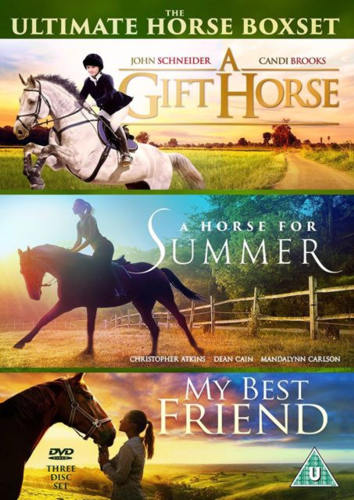 Collection of equine family dramas. In 'A Gift Horse' (2015) ten-year-old Amanda (Kyla Kenedy) seeks comfort at the ranch of wealthy, local businessman Mr. Canton (John Schneider) after losing her mother. After his own daughter rejects her new gift horse Misty, Amanda takes on the challenge of training her for an upcoming competition.

Will her faith in Misty be rewarded? In 'A Horse for Summer' (2015) Kent Walsh (Dean Cain) moves with his wife Teri (Terri Minton) and 14-year-old daughter Sarah (Nicole Taylor Criss) to small-town Arizona to fulfil his dream of running a ranch.

Struggling to make their dream come true and faced with a tough economy, the family's life changes further when they are joined by Kent's niece Summer Dean (Mandalynn Carlson) after her mother is arrested in New York.

Struggling to adapt to life outside of the city, the troubled teenager soon comes round to life on the ranch and finds a purpose in caring for the family's horses. 'My Best Friend' (2016) follows 13-year-old Kristen (Alexis Rosinsky) as she moves from her home in the city to live on her Grandma Pearl (Catherine Bach)'s ranch. As she begins to start her life over in the country, Kristen forges a close friendship with a talking horse named Stanford (voice of Spike Spencer) who quickly becomes her best source of guidance.