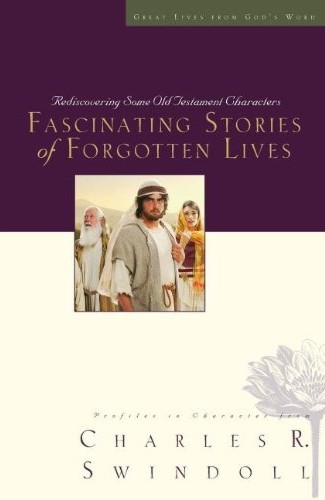 Fascinating Stories of Forgotten Lives by Charles Swindoll and published by Thomas Nelson.

Would you rather be a person of significance or a person of prominence? Think carefully! The answer to that question will shape your entire future.Pastor, teacher, and beloved author Charles Swindoll says, “Somehow life has taught us poorly. We’re trained to think that the most significant people are star athletes, actors, and musicians—the ones we applaud, those whose autographs we seek, those who have worldly renown.

“They aren’t. Not really.

Most often, the people really worth noting are those who turn a ‘nobody’ into a ‘somebody’ but never receive credit.” What is forgotten far too often is this: Success in God’s kingdom and in the church depends upon faithful people the public rarely knows. The Old Testament contains numerous fascinating stories of forgotten lives—unsung heroes whose actions, sacrifices, or battles failed to ascribe them worldly renown. These great lives, however, reveal significant