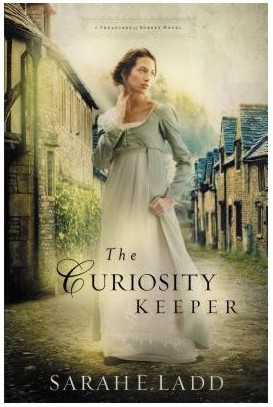 The Curiosity Keeper, Treasures of Surrey Series by Sarah E. Ladd and published by Thomas Nelson.

Camille Iverness can take care of herself. She’s done so since the day her mother abandoned the family and left Camille to run their shabby curiosity shop. But when a violent betrayal leaves her injured with no place to hide, Camille must allow a mysterious stranger to come to her aid.

Jonathan Gilchrist never wanted to inherit Kettering Hall. As a second son, he was content to work as the village apothecary. But when his brother’s death made him heir just as his father’s foolish decisions put the estate at risk, only the sale of a priceless possession—a ruby called the Bevoy—can save the family from ruin. But the gem has disappeared. And all trails lead to Iverness Curiosity Shop—and the beautiful shop girl who may be the answer to his many questions.

Caught at the intersection of blessings and curses, greed and deceit, these two determined souls must unite to protect what they hold dear. But when a passion that shines far brighter than any gem is ignited, they will have to decide how much they are willing to risk for their future, love, and happiness.

The Ladies of Ivy Cottage, Tales From Ivy Hill Series