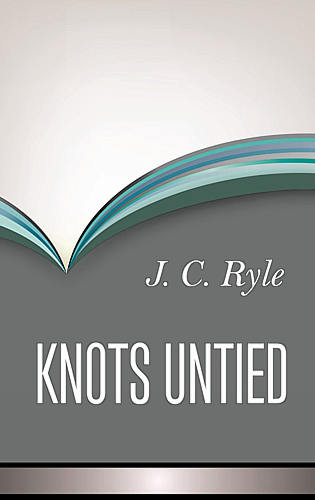 Knots Untied by J C Ryle and published by Banner of Truth Trust.

Knots Untied is J. C. Ryle’s leading work in defence of the evangelicalism of the Church of England. When first published in 1874 it proved immensely popular, and by 1885 it was reprinted in a tenth edition. Knots Untied is a classic volume in which Ryle covers the then current disputes about various points of religion within the Church of England, advocating and defending the evangelical position at every turn.

Knots Untied is unashamedly written from the ‘standpoint of an Evangelical Churchman’. Ryle’s presentation of the evangelical position is simply outstanding, ‘not because it differs substantially from what other evangelicals might say, but because’, according to J. I. Packer, ‘he sets it forth so clearly, so brilliantly, and so compellingly – in a word, so very, very well. … In this, as in so much else, his work retains benchmark status; for surely in principle his evangelicalism is neither more nor less than New Testament Christianity.’

‘Show us anything plainly written in that Book, and, however trying to flesh and blood, we will receive it, believe it, and submit to it. Show us anything, as religion, which is contrary to that Book, and, however specious, plausible, beautiful, and apparently desirable, we will not have it at any price…Here is rock: all else is sand.’ J. C. Ryle on the Bible as the only rule of faith and practice.

The Apostles' Doctrine of the Atonement